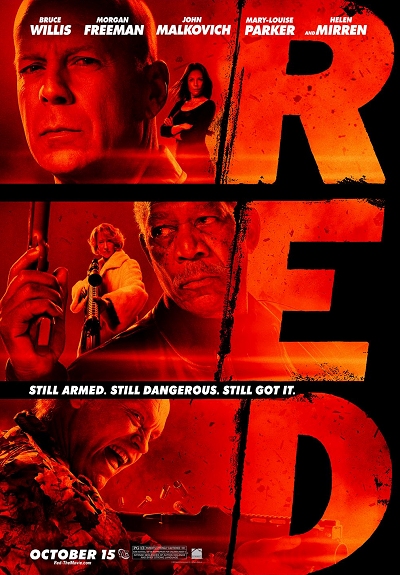 Frank Moses (Bruce Willis) used to be a hired gun for the CIA. Along with Joe (Morgan Freeman), Marvin (John Malkovich), and Victoria (Helen Mirren), Frank's specialty was carrying out contracts that the government didn't want the public to know about. These days, Frank and his old gang are all retired, but the powers that be are still concerned that they know too much, and dispatch a team of top assassins to ensure their silence. Now, Frank and his former team members realize that their only hope for survival is to break into CIA headquarters and expose the truth.
Cast: Bruce Willis (Frank Moses), Morgan Freeman (Joe Matheson), John Malkovich (Marvin Boggs), Helen Mirren (Victoria), Mary-Louise Parker (Sarah Ross), Karl Urban (William Cooper), Julian McMahon (Robert Stanton), Brian Cox (Ivan Simonov), Richard Dreyfuss (Alexander Dunnig), James Remar (Gabriel Singer), Rebecca Pidgeon (Cynthia Wilkes), Ernest Borgnine (Henry, the Records Keeper) 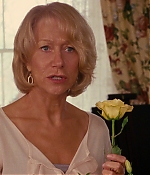 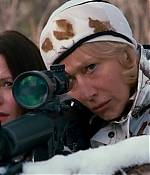 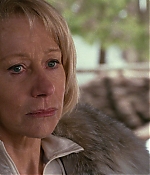 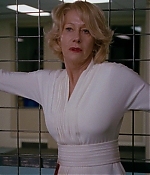 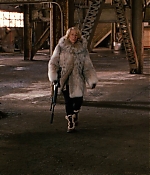 “Red”, the graphic novel published by DC Comics Wildstorm imprint, was originally written as a complete work but was released as three chapters over three months. Later, it was released in its entirety in book form. Although the graphic novel is just 66 pages long, Gregory Noveck, Senior Vice President of Creative Affairs at DC Comics, knew immediately after reading it that it was a perfect vehicle for a film adaptation. âI loved the book instantly,â says Noveck. âWarren and Cully are two of the brightest lights in the comic book universe and together they created a very slick, very cool action thriller with an awesome central character and an intriguing central theme. We had a mandate at DC Comics not to just adapt our superhero characters but to take advantage of the other amazing titles in our library. âRedâ was one of those titles that I had targeted very early on after joining the company. âObviously Warrenâs story had to be expanded in order to make a two-hour movie,â Noveck says. âBut all along the way we aimed to retain the best element of the book â a complex, conflicted hero â and to stay true to Warrenâs central theme… the idea of how our society readily discards people, in this case old guard CIA operatives and Cold War spies, once theyâve reached a certain age and replaces them with a new wave of younger, more tech-savvy agents.â Noveck then acted on that DC mandate, brought on Jon and Erich Hoeber, and took the adaptation idea to di Bonaventura Picturesâ executive Mark Vahradian, who in turn, showed it to producer Lorenzo di Bonaventura.

âWe then came up with the idea that if Frank Moses is an older agent who is now retired and then targeted,â says Erich Hoeber, âthen there must be other retired agents out there. That notion led us to create the other characters in the film and gave us the freedom to elaborate on all those other lives besides Frankâs.â After Bruce Willis was cast for the starring role, Morgan Freeman signed on to Joe Matheson, the senior member of the RED team. Freeman admits he never could have imagined or predicted being part of such a stellar cast. âClearly I knew Iâd be working with Bruce again,â says Freeman, referencing the 2006 film, Lucky Number Slevin, âand he and I always have a lot of fun on the set. But I didnât know I was going to get a shot at working with Helen Mirren, John Malkovich, Mary-Louise Parker and Richard Dreyfuss, too. I mean there is nothing better than getting to work with people you greatly admireâ¦people who have âthe chopsâ as they say in the music businessâ¦people who bring it to the table every day. Nobody was shucking and jiving on this show. Everybody was playing their A-game.â Next to hop on the RED bandwagon was Helen Mirren. For producers di Bonaventura and Vahradian, executive producer Noveck, as well as writers Jon and Erich Hoeber, Mirren was their definitive choice to play Victoria, a retired British operative now running an upscale bed-and-breakfast but who âstill takes the odd contract on the side.â âIn developing the script, Lorenzo and I could not get the image of Helen as an action hero out of our heads,â says Vahradian. âWe knew we wanted her from the very beginning.â âWe donât generally write roles with specific actors in mind,â says writer Jon Hoeber, because it is such a long shot that that person would be interested in or even available to do the movie. However, we did write Victoria with Helen in mind and we were so blown away when she agreed to do it.â

âNeedless to say, I was flattered when I was told that Jon and Erich wrote this part with me in mind,â says Mirren, who hails from the same, small English town as graphic novel author Warren Ellis. âBut there were a lot of other reasons I was attracted to the project, first and foremost, the chance to get to work with Bruce. It sounds like such a clichÃ© when people like me sit here and say âoh God heâs such a great guyâ but he is such a great guyâ¦and an incredibly talented and generous actor. Those are attributes that many times are not reflected in the image or personality of someone of Bruceâs height of stardom and success. Bruce has an incredible quality of wanting to be with other people, wanting to participate and not to hold himself apart. I think that is especially apparent for him in this roleâ¦he was the leader of our team.â Mirrenâs inspiration for her character came from someone not generally associated with espionage and assassins â decorating doyenne and global brand businesswoman Martha Stewart. âYes, she was indeed my inspiration even down to the hair, my Martha Stewart hair,â says Mirren, smiling. âSheâs obviously not a retired assassin but whatever Martha Stewart does, she does it really, really well. Sheâs a perfectionist and I love her combination of feminine softness and an incredible strength of efficiency and practicality. I hope she wonât be insulted by this characterization because I am a big, big fan of hers.â Also championed by Noveck, John Malkovich, was cast as the role of Marvin Boggs, a master-of-disguise CIA operative-turned-guinea pig after being given daily doses of LSD for eleven years by the Agency. âWhen I was first approached about the role I was already in negotiations for something else,â says Malkovich, âbut luckily that fell through and I was able to come back to this project which was fantastic for me. I liked the script and the character very much as well as all the filmmakers involved. In fact, the writers said âweâll change anything.â They were very amenable to my collaborative efforts but I told them not to change anything because I liked it the way it wasâ¦a very tight scriptâ¦not a lot of useless blah blah blahâ¦good characters, good fun.”

“R.E.D.” was a surpsie hit upon its opening in October 2010, eventually grossing $ 200 million at the box office. The critics were not that favorable though. The Hollywood Reporter stated “Although tailor-made for genre fans, it benefits from flavors of humor and romance that keep its appeal from being fanboy-only”. Conversely, Roger Ebert gave the film two stars out of four, stating that it’s “neither a good movie nor a bad one. It features actors that we like doing things we wish were more interesting.” New York Times said, “It is possible to have a good time at RED, but it is not a very good movie. It doesn’t really try to be, and given the present state of the Hollywood economy, this may be a wise choice”. And the Los Angeles Times wrote, “It’s not that it doesn’t have effective moments, it’s that it doesn’t have as many as it thinks it does. The film’s inescapable air of glib self-satisfaction is not only largely unearned, it’s downright irritating”. “R.E.D” received a Golden Globe nomination as Best Picture (Musical or Comedy) at the 2011 Golden Globe Awards.

“R.E.D.” can be called a fun movie that doesn’t take itself too serious, which is why I’ve enjoyed it so much. It’s biggest advantage is a great cast, most especially John Malkovich, who had his share of crazy characters in the past, and who creates a really unique character with Marvin. You can tell Morgan Freemand Helen Mirren had great fun with their parts, and I think the film did Helen really well – after being heralded as the “Queen” like a brand (there could be worse things), I’m sure it was uplifting for audience members who are not so familiar with her previous work to see her let loose. The supporting cast is equally good, with Richard Dreyfuss and Ernest Borgnine. THere have been quite a few films released around that time with “older stars” back in action. Some of them have taken their premise for a gorefest or stupid action (in whose footsteps the sequel to this one follows). But “R.E.D.” makes a nice exception and focuses on its characters and the fun. It gets outrageous as well, but if you’re in for a fun time, you’ll enjoy “R.E.D.” Recommended.

R.E.D. is being listed under the following tags: Comedy, Comics Adaptation, Thriller, Year 2010
Back to previous page
Advertisment