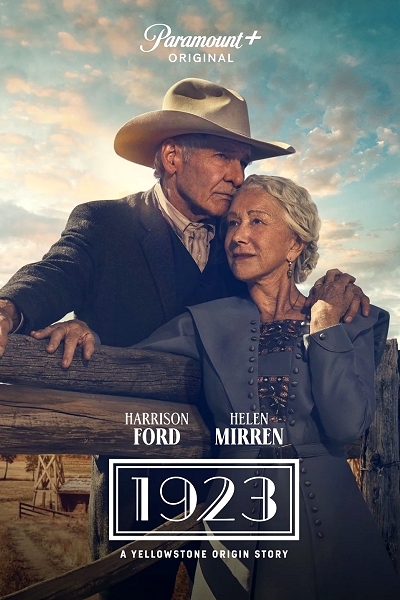 Reunited 36 years after playing husband and wife in Peter Weir’s “The Mosquito Coast”, Harrison Ford and Helen Mirren lead two season of an origin story, set a century before Kevin Costnerâs John Dutton III holds together his familyâs sprawling Montana empire in Americaâs most popular TV show, the contemporary Yellowstone series, the spin-off explores what life was like for the second and third generation of Duttons to work that land. They find themselves turning back to the first generation for guidance. In an interview with Vanity Fair, Mirren says she wanted Cara to represent another aspect of rugged individualism that has long-defined American society. âI see Cara as an immigrant,â says the British-born actress. âOne of the things I very strongly wanted was that she would speak with an Irish accent, not with an American accent. Itâs always slightly annoyed me with Westerns that you have all these people speaking with modern American accents when in fact so many of them were fairly recent immigrants.â

The big Irish immigration to America, because of the potato famine, was in the late 19th century. That absolutely chronologically works for Cara. Sheâs now in her late 60s, we imagine. So she wouldâve come, I think, as a young woman from Ireland. I think thatâs one of the extraordinary elements of America. The people who arrived, and are still arriving, are people with enormous resilience and enormous courage and independence. Theyâve been married a long time. They havenât had children, so they havenât had the sense of children holding them together. Time has forged a relationship that might best be described as sturdy. That really is what it becomes, isnât it? An incredible partnership where you can be honest with each other, and your love and support of each other is total, but at the same time you are no longer blinded by love or by lust. Youâre much more clear-eyed about your relationship, but the relationship becomes all the stronger for that very reason. (Helen Mirren, Vanity Fair, November 11, 2022)

“1923” is another chapter in the Yellowstone story, but each segment adds up to a broader study of the pressures people face and the complex ways they react to them, sometimes improving things, sometimes making them worse. The series premieres on Paramount+ on December 18, 2022.

1923: A Yellowstone Origin Story is being listed under the following tags: Anthology Series, Drama, Western, Year 2022
Back to previous page
Advertisment