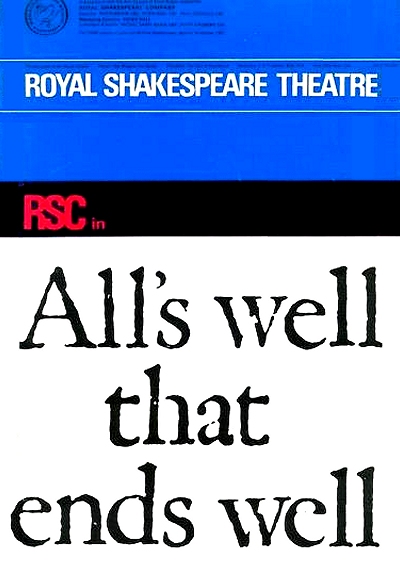 Helena (Estelle Kohler), orphaned daughter of a doctor, is under the protection of the widowed Countess of Rossillion (Catherine Lacey). In love with Bertram (Ian Richardson), the countess' son, Helena follows him to court, where she cures the sick French king (Sebastian Shaw) of an apparently fatal illness. The king rewards her by offering her the husband of her choice. She names Bertram; he resists. When forced by the king to marry her, he refuses to sleep with her and, accompanied by the braggart Parolles (Clive Swift), leaves for the Italian wars.
Cast: Estelle Kohler (Helena), Ian Richardson (Bertram), Catherine Lacey (Countess of Rossillion), Sebastian Shaw (King of France), Clive Swift (Parolles), Ian Hogg (Lavatch), Helen Mirren (Diana), Brewster Mason (Lord Lafew), Natalie Kent (Mariana), Daniel Moynihan (Dumaine), Edward Cicciarelli (Duke of Florence), Elizabeth Spriggs (An Old Widow), Patrick O'Connell (Morgan), Hector Ross (Rinaldo) 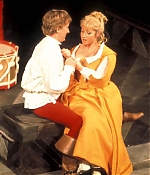 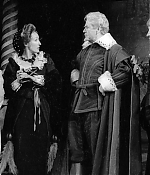 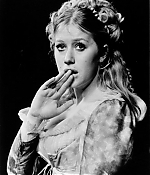 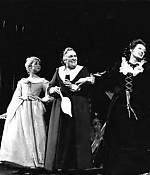 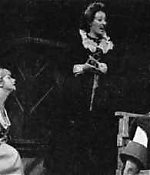 John Bartonâs 1967 production, in which Helen Mirren played Diana, was well-received. John Peter welcomed a âsure-footed and thoughtful revival of a flawed but unjustly neglected playâ. âA step-child of the theatre, neither heart-rending nor heart-warmingâ it might be, but still able to project a âscattered experimental brillianceâ. He admired Timothy OâBrienâs set, which evoked the âfull Caroline spendour of ruffs, cloaks and tall hatsâ. The whole production had a âflowing, consistent style of sophistication and rich baroque graceâ, while the clarity of the verse-speaking was âflawless throughoutâ. The Illustrated London News found the production âblessedly directâ, an effect achieved at the cost of cutting some 500 lines, including the whole of III.iv, and telescoping and transposing scenes elsewhere.

Philip Hope-Wallace praised the âextreme honesty, lucidity and sound interpretationâ of Bartonâs production but found the first half âdullâ. Estelle Kohlerâs Helena, although âcharmingâ, had âlittle enough to offer of special radiance or sparkle and when not quite sure of herself tended to simper and to squeakâ. For him the âfirst breakthroughâ of the evening came when Diana duped Ian Richardsonâs Bertram (scene IV.ii). According to the Sunday Telegraph, Bertram came across as ârather endearingly clumsy and over-eager as he trie[d] to seduce Diana across an awkward and uncomfortable travelling trunk.â She seemed to succumb to his entreaties, but then chose her moment to make her demand of him. Mirren let Richardson embrace her, then said unexpectedly, âGive me that ringâ. Not for the first time in the play, the immature Bertram was outwitted by a more resourceful female.

All’s Well That Ends Well is being listed under the following tags: The Royal Shakespeare Company, William Shakespeare, Year 1967
Back to previous page
Advertisment