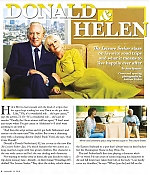 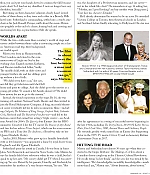 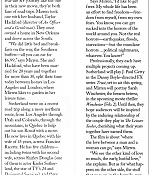 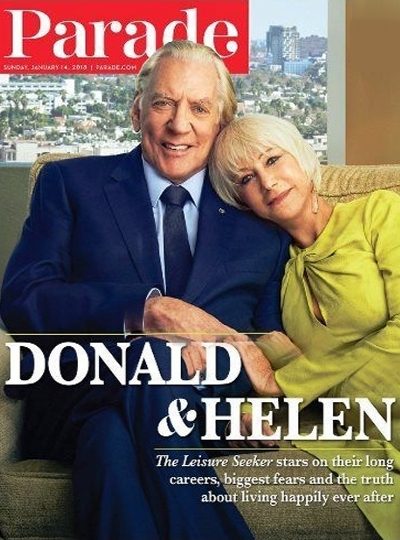 The Leisure Seeker stars on their long careers, biggest fears and the truth about living happily ever after.

Helen Mirren had enough with the kind of scripts that her agent kept sending her way. That is, as she got older. Like, ââOh, itâs a wonderful role … sheâs got cancer,â â says the actress, 72. Or ââItâs a wonderful role … sheâs got dementia.â â Finally, the Oscar winner told her agent, ââI donât want any scripts where Iâve got cancer or AlzheimerâsâI donât want anything to do with it.â âAnd then this script arrives and itâs got both Alzheimerâs and cancerâat the same time!â She cackles. But it was a charming story with a charming director (Italyâs Paolo VirzÃ¬), she says. âAnd it was Donald.â Donald is Donald Sutherland, 82, her co-star in the new film The Leisure Seeker ( Jan. 19), which features the two actors as a long-married couple with two grown children. Her character is the one with cancer and heâs the one dealing with dementia. Not wanting to wither away at home, the pair decides to take a trip down memory laneâliterallyâin their vintage Winnebago RV, dubbed âthe Leisure Seeker.â They drive the rickety vehicle down the Eastern Seaboard to a spot thatâs always been on their bucket list: the Hemingway Home in Key West, Fla. This isnât Sutherlandâs first time playing a character whoâs illâor worse. He says years of scenes requiring his characters to die and fall down have taken their toll on his body. âI can hardly move my shoulders,â he says. âWhen [you die] and fall on the floor, you canât put your hands down [to cushion the fall] because youâre dead. So I land on my shoulders. I now no longer have any shoulders, basically.â

But taking on their charactersâ ailments clearly hasnât slowed either of them down, as they tease each other in a Beverly Hills hotel suite. Sutherland is commanding, settled into a sturdy armchair as his Jack Russell, Porque, sniffs about the room. Mirren sits sprightly at the end of a chaise, leaning back and crossing and uncrossing her legs as punctuation while she speaks.

While the twoâwith more than a centuryâs worth of stage and screen credits between themâplay a convincing couple on a classic American road trip, their backgrounds are worlds apart. Mirren was born in Hammersmith, West London, and raised in the commuter town of Leigh-on-Sea by her working-class English mother, Kathleen, and Russian intellectual father, Vasiliy. The middle child, with an older sister and younger brother, she and her siblings grew up without a lot of frills. âWe didnât even have a car,â she says, nor did they get television until sheâd left home and gone to college. And she didnât go to the movies as a young girl either. âIt sounds a bit Amish, doesnât it? We didnât have money for me to go to the cinema.â Instead, she found inspiration on the stage. By 18, she was training at Londonâs National Youth Theatre and then invited to join the Royal Shakespeare Company. A long, successful theatrical career eventually led her to roles in numerous filmsâincluding Caligula, The Madness of King George, Gosford Park, Calendar Girls, Hitchcock and The Hundred-Foot Journeyâ and led to the lustrous career that earned her actingâs âtriple crownââan Academy Award (for 2006âs The Queen), four Emmys (for the HBO miniseries Elizabeth I, for the TV movie The Passion of Ayn Rand and two for her role in Prime Suspect, which ran for seven seasons on PBS) and a Tony (for The Audience, a Broadway take on her Queen Elizabeth II role). And in 2003, Mirrenâwho grew up in a humble household with so few luxuriesâwas appointed a dame by royal decree from Englandâs real-life Queen Elizabeth.

Sutherland spent his youth in Canada. He was born in Saint John, New Brunswick, and raised in Nova Scotia. Like Mirren, he says his family didnât have television when he was a child, but heâs quick to up her ante. âMy country didnât get TV when I was growing up,â he says. Raised by his parents, Dorothy and Frederick, he remembers his mother as âa very honest woman,â he says. âShe was the daughter of a Presbyterian minister, and she neverâ not in her whole lifeâlied.â He remembers at age 16 asking her, ââMother, am I good looking?â and my mother went [long pause], â Your face has character, Donald.â â Heâd already determined he wanted to be an actor. He attended Victoria College in Toronto, then theatrical schools in London and Scotland, before finally relocating to Hollywood. His star rose after his appearances in a string of successful movies beginning in the late 1960s, including The Dirty Dozen, M*A*S*H, Kellyâs Heroes, Klute, Donât Look Now, 1900, Animal House and Ordinary People. His versatile, prolific work earned him an Emmy (for Supporting Actor in the 1995 TV movie Citizen X) and an honorary lifetime achievement Oscar in 2017.

Mir re na nd Sutherland metal most 30 years ago when they costarred in the biopic Bethune: The Making of a Hero, about a Canadian doctor caught up in the Chinese Cultural Revolution. He recalls being âin her thrall,â and she says she was struck by his intelligence. âHeâs knowledgable, incredibly knowledgableâmuch more than I am,â Mirren says. âAbout literature, about history.â