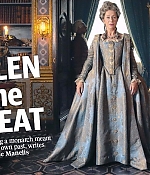 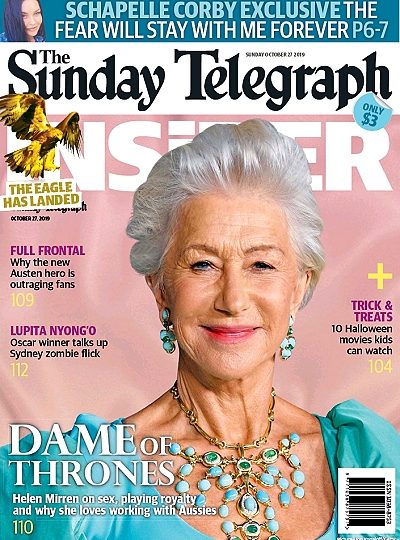 âIt was revisiting part of my life that was repressed for a long time. My father was born in Russia and so Iâm half-Russian. My grandfather had been in the Tsarâs army, so we were White Russians and my father very much wanted to assimilate. So he changed our family name from Mironiv to Mirren,â she explains. âHe had to accept that world was gone and we just had to assimilate and be British.â She reminisces about the first time she visited her ancestral home.

âIt was in the late 1960s and Russia was very deep into heavy Bolshevik communism. To find myself standing on the terrain that had given birth to my grandfather was a very emotional moment for me.â She pauses, composing herself for a moment. âItâs a complex relationship I have with Russia, as it was with Catherine the Great, who wasnât Russian at all, but in fact she was a German princess!â she laughs. âThough of course, she absolutely loved Russia and she gave it her all.â

This four-part series features her legendary love affairs, including the most notable, with Count Grigory Orlov (Richard Roxburgh), and another relationship with Grigory Potemkin (Jason Clarke). Seriously ahead of her time, Catherine was also quite the advocate for womenâs issues, and remains the longestrunning female Russian leader, ruling from 1762 to 1796. She came to power through her marriage to the Tsar of Russia, Peter III, her second cousin. A coup, partly organised by her lover, Count Orlov from the Guard Regiment, placed her in the position of empress. âCatherine was historically maligned starting with her son, with whom she so obviously had a very difficult relationship,â Mirren explains, âand he maligned her after her death. I think that calumny has stuck with her throughout history. Itâs the way powerful, successful women, are punished very often â for being just that, powerful and successful.

âAs for her sexuality,â Mirren pauses and rolls her eyes, âthe intimation that she was some sort of debauched, mad sexual creature absolutely wasnât true. She was a serial monogamist, as so many of us are.â Her gaze is direct, and she offers, after a beat, âMe included.â Now 74, she has been married to director Taylor Hackford since 1997. And while many women, regardless of age, find sex scenes particularly daunting, this has famously never been the case for Mirren. âIt was lovely. I enjoyed every minute!â she laughs. âI think Catherine loved sex, she loved men, and she loved having a sexual relationship. She loved to have a guy around but knew it was dangerous territory because if she was to marry, she would relinquish power. But she was always very nice to them. She gave them palaces, she even made one of them King of Poland when she wanted to get rid of him.â She laughs. âSo, she loved men. She wanted to be flattered and to have someone to have dinner with.â

Another aspect Mirren thoroughly enjoyed was working with Aussie actors Jason Clarke and Richard Roxburgh. âNothing can be more fun than getting a couple of Australian actors together. I have more scenes with Jason, obviously, and heâs just the most wonderful guy. Heâs funny and generous and very butch, but at the same time very emotionally open, and just so much fun. I think he really, really got Potemkin,â she smiles. âThatâs a big character to have to embrace. He just went at it as Potemkin would himself, full blast, like a bull in a china shop. It was a great thing to see. And Richard and Jason are old mates, so they were very happy to see each other and work together and they obviously knew each other very well.â Having played many queens and women in power, how would Mirren herself handle absolute power? âI would give it away. I wouldnât want it,â she shakes her head.

âIt must be the most incredibly dangerous thing. And of course, no one really has it. Even the Empress of Russia didnât have it because we are all cogs in a wheel, part of a jigsaw puzzle. Catherine was dependent upon the goodwill of the landowners. And even in other worlds, often young men and women want to be directors because they think theyâll have power, and to an extent they do, but they are very influenced by their financiers and producers. So I donât actually think absolute power exists, really.â She leans forward. âAnd remember, Iâve also played housekeepers, too, remember?â She is referencing in particular her turn in 2001âs Gosford Park as a maid, which earned her an Academy Award nomination. Mirren, who was awarded a DBE (Dame of the British Empire) in 2003, has of course garnered countless awards over the course of her career, which began in 1967 with the Royal Shakespeare Company. Perhaps the most prestigious was for her role as Queen Elizabeth in The Queen, for which she won the Best Actress Oscar in 2007 and many other leading awards. With such an embarrassment of riches, where does she keep her trophies?

âI have a house in London and a house in America, so I love having the American awards in London because theyâre more exotic there. Iâve made a joke before that I was thinking of building an extension to my house to put them in, in the same way as presidents have their libraries.â She roars with laughter. âI could have a recurring tape of all my acceptance speeches and everyone would have to listen to them when they were looking at the awards.â