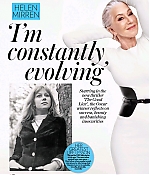 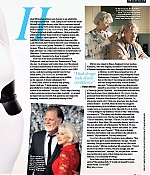 Helen Mirren has always seen beauty as an admirable â but largely irrelevant â trait. Early in her career she broke through on screen in sexy roles, like a courtesan turned empress in the 1979 erotic drama Caligula and a gangster moll in 1980âs The Long Good Friday. Still, Mirren says, âI had a huge lack of self-confidence. I felt profoundly awkward.â Rather than revel in her ingenue status, she says, âI kind of raged against it.â She instead began building a long-lasting career playing characters like Lady Macbeth, hard-boiled detective Jane Tennison in Prime Suspect and Queen Elizabeth II â strong, steely women. When she looks back on those earlier insecure days, she says: âIn a way I used them as an instrument of liberation. I was very incredibly physically uptight and unliberated. I needed to be freer in myself.â

Now one of the most acclaimed actresses in Hollywood, with an Oscar, four Emmys and a Tony, the star, 74, is busier and bolder than ever. She played a criminal mastermind in this yearâs Hobbs and Shaw and Russian ruler Catherine the Great in a new HBO series. And sheâs earning awards buzz for her latest movie, The Good Liar, in which she portrays a widow who might not be as gullible as she appears. A brand ambassador for LâOrÃ©al Paris, Mirren is clearly only getting better with age. âI think the key to ageing gracefully is to really not make yourself the centre of the universe,â she says. âFind a way of making other people more important than yourself â or at least as important as yourself. Ask questions and enjoy the amazing, wonderful, miraculous variety of life.â

Mirren was raised in Essex, England, by her mother, Kathleen, who was English, and father Vasily Mironoff, a Russian immigrant who later changed the family name to Mirren. In 1967 she pursued her love of performance and joined the prestigious Royal Shakespeare Company. âPeople often forget that at the time I was doing my early movies, I was also doing very heavy, serious theatre,â she says. âI always felt that was what proved myself as an actress.â In 2003 she was named a Dame by Queen Elizabeth â and four years later she won the Best Actress Oscar playing her in The Queen. On the personal front Mirren lives a low-key life in LA with her husband, American film director Taylor Hackford, 74, whom she wed in 1997. Only one time have the duo been tabloid fodder â in 2008, when Mirren was snapped looking stunning in a red bikini by paparazzi while the couple were on vacation in Italy. She told People in 2011, âI was posing for my husband, which is why I was holding my tummy in.â The photo only further cemented her status as a beauty icon. Yet the star deflects such talk. âIâm not beautiful,â she says. âIâm not. Iâm not Naomi Campbell or Kate Moss. We recognise beauty, but itâs not the end-all and be-all of humanity. Far from it. To me, itâs what you are as a being, outside and inside. So I have issues with the word âbeautyâ.â With typical British restraint, sheâll share only one attribute she admires in herself: âMy timeliness. Iâm very rarely late.â

Good Liar director Bill Condon is more effusive. âShe has this inner glow and youthfulness,â he says. âItâs her curiosity. She got to know everybody on-set. She cares about people.â Mirren credits her life experience. âI donât know if Iâm better or worse, but you change, and life changes around you,â she says. âAs you get older, certain insecurities drop away. Other things become more difficult. Iâm constantly evolving.â

Now if she could give her former insecure self any advice? She smiles slyly. âI would tell myself to learn these words, âGo to hell!ââ