From the archives: Soho tart Helen Mirren awaiting her next client!
The Daily Mail | March 03, 2007 | Written by Philip Dodd 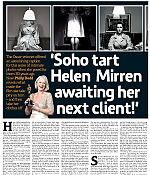 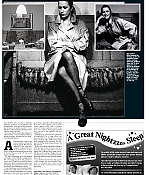 Helen Mirren emerged from the bedroom wearing an iridescent silk kimono. She hesitated for a moment, then sighed. “No, no, this won’t do. I can’t think what to wear.” She disappeared back into the shadows. When she sauntered out again, she was wearing black, pencil-seamed stockings, dominatrix-style black platforms and a tan mac – what used to be called a dirty old man’s coat. Her hair was scraped severely back from her forehead. She gave me a level gaze and announced: “Soho tart Helen Mirren, awaiting her next client.”

It was January 1978. I was a 20-year-old student and enamoured of the actress, like most other young males of the era. But although this scene happened exactly as I’ve written, the reality (sadly for me) was not that of a callow youth being invited into the intimate boudoir of a sex symbol. I was interviewing and photographing Helen for an Oxford magazine I’d recently set up called Vague. The staff liked to think it was a cross between some of the groovier publications around at the time – such as Andy Warhol’s Interview and Ritz, run by photographer David Bailey – or as close as we could cobble together on what seemed like a pocket-money budget. For the launch issue, we wanted a hot list of interviewees. Mirren, then aged 33 and already a star, was right at the top of mine. Now that she is Dame Helen Mirren and has just won an Oscar for her role in The Queen, it’s easy to forget that she was defiantly never an Establishment figure. Helen was an Essex girl who had spent time working on fairground attractions in Southend before making her stage debut playing the Egyptian queen in a 1965 production of Antony And Cleopatra. But it was her portrayal of a raunchy, boozed-up singer in David Hare’s play Teeth’N’Smiles in 1974 that had given her a profile in music papers such as Melody Maker. She had unsettling reddish hair and a sexuality that suited the decade: she was not afraid to strip on stage and was nicknamed “the Sex Queen of the RSC”. Having obtained a telephone number for Helen’s agent, I rang it from the Jesus College phone booth, feeding liberal quantities of 10p pieces into the slot. I received an instant rebuff – no, Miss Mirren would not be interested in an interview for Vague.

I could hardly blame them. It must have seemed like an unnecessary waste of time for them even to consider the request. But I had already learned a basic rule of reaching interview subjects: dogged persistence mixed with the right blend of respectful but not awestruck politeness paid off. Over the following weeks I phoned the agency regularly to see if she had changed her mind. The answer was always no. Then one day I got lucky. Someone in the office, possibly a temp, told me: “Well, she couldn’t talk to you anyway. She’s at the Royal Shakespeare Theatre in Stratford.” I didn’t need any more help. With another bag of coins, I was on the line to the theatre. “Oh yes,” a stagehand told me helpfully, “I’ll just go and get her.”

Seconds later, I was speaking to the actress. I didn’t even have to spend too long persuading her to agree to the interview. “Of course I’d love to talk to you. Why don’t you come over to my flat in London?” Helen said. Now that, as you can imagine, was what I called an invitation. However, any fantasies I might have been entertaining were quickly extinguished. Christine, my girlfriend at the time, also worked for Vague and insisted on coming with me to do the interview. She had a formidable personality and I didn’t dare argue. On the day, the weather was menacing. As neither Christine nor I could drive, another friend, Kate, volunteered to take us to Helen’s flat in West London, instantly doubling my chaperone quota. Those ferocious, buffeting crosswinds you sometimes get on the M40 were doing their damnedest to blow us off course. The rain was slanting down. We’d also heard that Helen had a reputation for being tough on vacuous journalists and we were feeling a little edgy. When we reached her flat, she set us at ease immediately, opening the door with a broad smile. She had a welcoming, make-up-free face and was dressed in jeans and a jumper. She launched straight into a description of her household chores – she had spent the morning scrubbing the floors – and led us into the kitchen. The ground-floor flat where she lived with fashion photographer James Wedge felt bohemian, almost student-like: in the kitchen were a pine table, patterned mugs and an Indian print shawl thrown over a pew-like bench, with some folksy art on the walls. She was flirtatious in the way that some performers can manage to flirt with anyone they meet, or rather make everyone – male or female -feel that they have been gently flirted with. Mick Jagger, whom I’ve met since, has the same effect. The presence of my girlfriend at the table was reminder enough that this was not for my personal benefit, but it was enjoyable just the same. Helen talked openly for almost two hours, although there were few clues to her future career path.

At that point, she was still a stage actress – she was doing her best to avoid television roles, thinking it would be like working in a factory. “It must be very soul-destroying,” Helen told me, although she didn’t rule it out. “I’m very curious about all forms of theatre, and very curious about investigating them.” Curiosity was a theme of the conversation. She related a story about working with director Peter Brook in Africa. During the tour, the company were in the Sahara when Helen noticed a rock with a “strange, dark hole”. Instinctively she stuck her finger into the hole, only for Peter Brook to snatch her finger away. “Don’t do it,” he told her. “You don’t know what might be in there.” For Helen, that summed up her personality. “I go rushing into situations where it would be much more sensible to stay cool and reserved,” she told me, explaining her love of the unexpected. “I remember once doing a performance of Macbeth at Stratford, which we did very, very dark. In the middle of the show, the computer went wrong. Every single light in the whole auditorium went on full blast and the stage was suddenly exposed in this extraordinary, terrifying white light. And I thought, ‘Great!’.” She also talked about her approach to acting. Alec Guinness had been an early role model.

His ability to take on a disguise had impressed her, but she said: “I don’t feel the same any more. I don’t like disguises at all now. I can’t pretend to be someone else. I just like to find whatever the character is within myself. I try to find that, rather than just putting on lots of funny noses and hats.” Of course she did eventually change her mind on this – hats in particular being a rather necessary accessory for her Oscar-winning performance. As the interview came to an end she asked us about the new magazine. We said we wanted all our interview subjects to get involved in their own article. At this point, I suggested she might want to help with the photos, and off she went to style herself. The idea of dressing up for the photos was Helen’s. She could have simply posed for a standard mug shot and packed us on our way. There was no need for her to make more than the minimum effort. But something had piqued her interest and she clearly had something in mind. I shot the photos as she crouched below the kitchen table, only her kohled eyes visible (and what wonderful eyes), sitting demurely at the table, then jumping up on to it, giving a gentle flash of that mac.
Her enthusiasm and generosity of spirit had presented us with a great lead interview for the magazine. Before we left, I’d asked her about a quote from a journalist who had thought that she really wanted to be a busty movie queen rather than a theatre actress. “I’d much rather be a rock’n’roll star,” she replied. Although cinema was not yet on the agenda, she was ambitious. Another story concerned her childhood in Southend. For a stage show she was dressed as a blackbird in black crepe, stuck in a pie, while some pudgy rival glittered as the princess. The six-year-old Mirren fumed, determined to be the princess. To me, the session with Mirren offered a brief glimpse of the woman, clearly a transient moment.

But when I saw the photos she’d allowed to be taken of herself last week, eating a burger, dressed in Christian Lacroix and with her freshly presented Oscar to hand, it didn’t surprise me at all. Long before she became the queen of the cinema, she was a funky, feisty, rock’n’roll princess -and all the honours in the world haven’t taken that away.