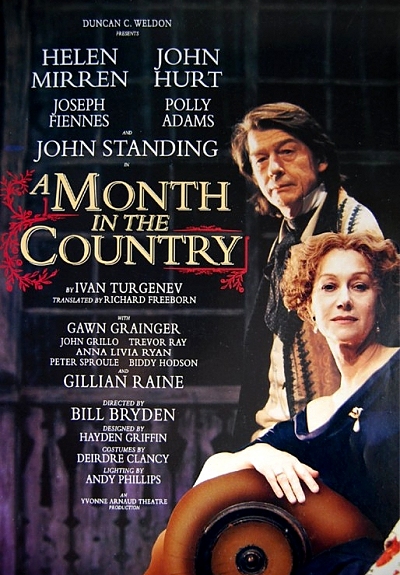 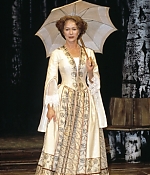 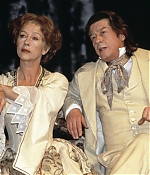 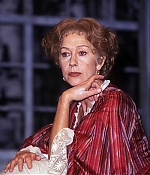 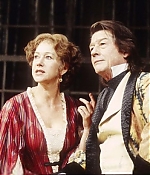 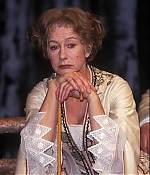 “A Month in the Country” has a long and chequered history. Originally titled “The Student”, it was written between 1848 and 1850 in France. It was banned immediately by the St. Petersburg censor without ever being performed in the theatre, although according to Turgenev, it was “quite a big success in people’s drawing rooms”. He changed the title to “Two Women” (as students were always politically suspect), and sent the play to Moscow in hope that it would pass the censor there – but yet again it was banned. In 1854 it was finally passed for publication on condition that major cuts and alterations were made; these demands seem to have been made more on moral, rather than political, ground – for example, Natalya Petrovna had to become a widow rather than a married woman. To play down its controversiality, Turgenev changed the name to “A Month in the Country”. After the accession of Alexander II in 1855, censorship became less strict so that Turgenev was able to restore some of the cut passages whilst preparing the 1869 edition of his “Collected Works”. The play had still never be performed.

In 1872, the Moscow actress E N Vasilyeva wished to play the part of Natalya Petrovna for her benefit performance. Although Tugenev did all he could to dissuade her, saying it was not suitable for the stage, he finally gave permission for the play to be cut and performed, but it was not a great success on this occasion. It was not performed again until 1879, when the play was hailed, finally, as a great work. It became a regular part of the Russian repertoire until the Revolution in 1917, after which it was scarcely ever performed. However, outside the Soviet Union, “A Month in the Country” was frequently revived, as it still is. A hundred years after Turgenev’s death, its success if finally assured.

In 1994, Helen Mirren and John Hurt starred in the West End production of “A Month in the Country”, directed by Bill Bryden. The play opened to critical acclaim, especially for Mirren, who was assured to perform her greatest theatrical triumph of the 1990s. Clive Hirschhorn wrote in his review for the Sunday Express: “Mirren dazzlingly alternates jealousy, joy, rage and treachery with passion, wilfulness and despair. I have never seen a production of this remarkable play which draws more laughter, is more sensitive to its many psychological nuances, and is more convincingly performed. A rare gem for the West End”. And Benedict Nightingale wrote for The Times: “I have not space to talk you through the monologue in which Natalya imagines Vera and the tutor in each other’s arms. Take my word that she stands there, alone and exposed and obliged to use a superannuated form of dramatic address; and yet she could not be more natural in her switches from pain to canny calculation to rapture to self-loathing to hope to despair. We in the audience laughed, and it did not matter. We were touched, and that was good, too. We all knew we were watching a major actress in her prime.” After its February/March run at the Yvonne Arnaud Theatre, “A Month in the Country” transfered to the Albery Theatre for a 10 week run. Helen Mirren would reprise the role of Natalya Petrovna a year later in her Broadway debut in New York.

A Month in the Country is being listed under the following tags: Albery Theatre, Arnaud Theatre, van Turgenev, Year 1994
Back to previous page
Advertisment